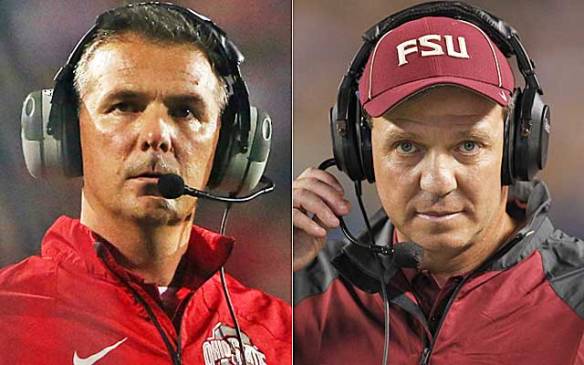 Urban Meyer and Jimbo Fisher are one win away from a BCS title bid.

For the third time in four weeks, an unbeaten (and potential championship contender) has gone down, clearing up the national title picture. This week, Alabama fell from the ranks of the undefeated thanks to one of the greatest finishes in college football history. For those of you living under a rock for the last six days, the Crimson Tide decided to kick a 57-yard field goal with one second left when knotted at 28. Bama’s kick fell short, with Chris Davis catching it about nine yards deep in the end zone. After evading a few defenders and tiptoeing down the sideline, Davis easily trotted into the end zone, delivering an Iron Bowl win to Auburn and likely eliminating Alabama from the BCS National Championship.

Now we’re left with just two unbeaten teams from major conferences: Florida State and Ohio State. The Seminoles seem to all but have a spot in the national title game as their ACC Championship opponent is a surprising 10-2 Duke. The Blue Devils have won eight straight after dropping back-to-back games against Georgia Tech and Pittsburgh, but will likely offer little resistance against a complete FSU squad. With Jameis Winston now being cleared of sexual assault allegations, Florida State fans should all but purchase their tickets to Pasadena.

The Buckeyes face a much more difficult challenge in the form of Michigan State. The Spartans finished the regular season fourth in points allowed per game, thanks to five contests in which they didn’t allow a touchdown. However, their schedule was third easiest in the top 25, a big reason why they are several slots below their BCS mark in these rankings. Even with their defensive rankings being taken with a grain of salt, Sparty should give the Buckeyes one of their biggest challenges of the season. Will Urban Meyer’s team rebound from a narrow victory over Michigan in the Big Game, or did the Wolverines identify flaws their intra-state brethren can use to win the Big Ten?

If you missed last week’s rankings while Oregon Sports News enjoyed the holidays, you can find them on my blog. If you’re wondering where all these numbers come from, a general explanation can found here.

Georgia, 22nd in the BCS behind a strong computer ranking, came in 26th in the Rankings, 0.11 behind Ball State. Georgia likely benefits from their position in the SEC, but a four-point loss to Vanderbilt, as well as four wins of seven points or less keep the Dawgs just outside the rankings. The Longhorns came in at 25th in the BCS but just 32nd in the Rankings. Texas is hurt by a score differential of +88, which is 46th in the country.

The Ducks dropped the Beavers to 6-6 with a last-minute touchdown. The win keeps Oregon on pace for the Alamo Bowl, where they’ll likely face Oklahoma. Mark Helfrich must get his team playing better if they want to win in San Antonio. The Beavers, meanwhile, face the prospects of playing in the Heart of Dallas Bowl or the San Diego Credit Union Poinsettia Bowl. Not exactly where they hoped their season would end.

East Carolina dropped to 28th after their 31-point loss to Marshall, who has ascended to 30th. Cincinnati, 31st, faces off against Louisville this weekend. Iowa rose to 36th after their thumping of Nebraska. Boise State finds themselves at 41st afollowing an easy win against New Mexico. Michigan comes in at 48th on the heels of their one-point loss to the Buckeyes. Louisiana-Lafayette continues to be our highest-ranked Sun Belt team, but fell 11 spots to 49th after their loss to rival (I think, but who knows anything about the Sun Belt), Louisiana-Monroe.

Our bottom five this week starts of with the University of Idaho, who lost to 2-10 New Mexico State. Southern Miss, coming off their first win in two seasons, is next, followed by FIU, Georgia State and Miami (OH), who brings up the final Caboose.